Review: The Shadows Between Us by Tricia Levenseller 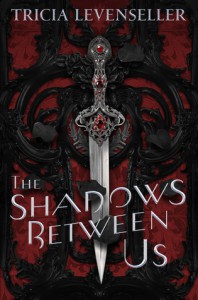 This book was so much fun! I have never read the author before but I enjoyed her style very much, so I think I might pick up some of her other books after this one. This one had a bit more romance than I expected but it had a lot of adventure and twists and turns that kept me entertained.

Alessandra is delightfully scandalous. She is witty and funny but also slightly sociopathic. She delights in using men and bucking the patriarchal system she lives in. She figures that if men can have a thousand lovers then the women must not be being very chaste either so why not. She killed the first boy who broke her heart and is determined to not make herself vulnerable ever again. Instead she has a mission to seduce the king and then kill him and take over his kingdom. She finally sees her opportunity with the engagement of her older sister, since she was not allowed to attend court until that time. She catches the Shadow King’s eye immediately and away we go.

I fully expected for the plot of the story to be a romance. I knew going in that Alessandra would fall in love with the king, and he with her, and she would no longer want to go through with her plan. So, I didn’t really mind when the story started taking me that way. Especially since the romance was handled with a lot of snark and lots of nefarious plotting and teasing. There was so much sexual tension in this book and it was delicious. Kallias set my heart pitter pattering and I hoped beyond hope that he was getting through to Alessandra too. He’s just so delightfully bad!

The only downside I had with this book was that I found the rules of the world building to be a tad inconsistent. We are told from the outset that this is a very Victorian world. Women are expected to be demure, chaste, and never be found in a compromising situation that could ruin their opportunities for a good marriage. Women cannot go to court to attempt to woo a husband until all of their older sisters are married off. The males of the family make the marriage arrangements. All of this is extremely typical. But then, it’s also okay for the nobles to be engaged in homosexual or bisexual relationships. Openly and at court. That certainly does not fit with the world you have built. At all. I am okay with either world. I am okay with a very straitlaced Victorian world. And I am okay with a slightly more liberal world encompassing people of all sexualities. But the two things don’t work well together.

This small gripe aside, I loved this book. It was wonderfully wicked and very sexy. I was sad it was over.