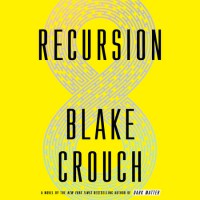 WARNING: This review will contain spoilers. Mild ones, epic ones, tiny ones, big ones, and even gigantic ones. This is your one warning. Okay, I might give you another warning before the biggest one, maybe.

This book was quite an endeavor for an author to take on, the concept of it is intimidating. So I have to give the author a lot of credit in trying to tackle such an immense idea. A lot of it worked. The last 150 pages didn’t.

I have never read Blake Crouch before and didn’t make the connection between this and the Wayward Pines books/show until after I got the book. This was an impulse buy. I was drawn in by the interesting cover, read the blurb and thought “Hmm, this is an intriguing idea.” I really enjoyed the way Crouch writes. It is engaging and informative without dragging the story down in extraneous details. This is a difficult balance to maintain. Especially if you are trying to explain (and probably failing to explain, because who actually could understand this stuff except a super genius) complex things in a way that makes sense to the masses, while knowing that you will have to alter any basis in science that it has in order to keep your narrative intact.

I recognize that the “science” in the book is overly simplistic, but for a novel it needs to be. I was not looking for a scholarly paper on the theory of reactivating memories in Alzheimer’s patients. So yes, I totally understand the complaints that “curing” Alzheimer’s isn’t as simple as just memory. The brain degradation goes much beyond just memory. But for the purpose of the story, this is what Helena was trying to do. Trying to find a way to recover the memories that these patients lost and then reactivating them to fight the disease. Simplistic notion? Of course. But it’s enough to get our story going.

I really enjoyed the cat and mouse game between Helena and Slade, and then later between Barry and Slade. Basically, Slade discovers that’s Helena’s memory reactivation program actually sends the consciousness of the person back to the memory they were re-living. It was interesting because it takes place over several timelines. And the idea is that if you get shuffled back into a memory of the past anything that you’ve already lived becomes a “dead” memory and on the date you originally made the jump all those dead memories come flooding back. Not just for you, but everyone involved in those other memories. Naturally this leads to chaos as people suddenly find their brain filled with memories of a life they didn’t live. I was rooting for Helena and Barry to succeed and I was excited to see how they might accomplish this monumental task. How do you stop a man who can jump back into time to get another chance at stopping you?

Things took a turn for the worse when it becomes like something out of the movie Inception. Multiple people making multiple jumps back in time, over and over and over. And expansive descriptions of memories that no longer exist and new ones that do, until the next page when those “new” ones are now dead and overwritten. I had a really hard time following any of it. Then we come to the end game. Helena and Barry hide out, working on solving the problem of the returning “dead” memories so that world doesn’t end, and then Helena going back to her teen years to try again when they fail. This portion got incredibly repetitive. The two of them having the same conversations, doing the same things, as they realized they failed and had to try again.

Here’s where my biggest problem came in. and here’s your SECOND WARNING:  This is the big spoiler. It literally spoils the entire ending.

The logical way to end this is to go back to the event that precipitated the first timeline shift and change it, right? Apparently, no one in the book has figured out how to do that. Because that timeline is now a dead memory and they can’t figure out how to send people back to dead memories. Barry confronts Slade about it, because he heard that Slade might have a solution, and Slade basically says “Go back to the original memory. The day I killed Helena to steal her invention.” Barry says he can’t, that’s a dead memory. And all Slade says is “I did.” Barry runs to tell Helena and finds she’s already made the jump and he’ll have to wait until this memory returns to his mind the next time to tell her so they can try. Problem if, the next time Helena has died. So by the time Barry remembers, she is already gone and he’s on his own. Then he just figures it out apparently. No seriously, that’s what happens.

Barry is lying next to Helena’s grave, taken a bunch of pills to end his life, and then decides that he has to try to reactivate a dead memory and fix things once and for all. So, with dwindling time until those pills kick in, he runs to the lab and tries to map a dead memory. It succeeds, he goes back in time and stops the original event and everything is set right again. All in about 5 pages. And it made me mad.

We just spent an entire book with you telling me it’s impossible to go back to a dead memory. Then you find out that, maybe, it’s not impossible after all but you have no idea how to do it. And then figure it out in five minutes? But Helena who had literally been working out a solution to this for over a hundred years couldn’t figure that out? It reminded me a Stephen King ending. Blake Crouch got tired of this book, wanted it to be over and was just like “And so, there was a giant spider, the end.” I felt pretty ripped off and it lowered the rating of the entire book for me. It didn’t pay off. So even though I largely enjoyed the book, the ending tainted it for me.

I will probably read other books by Blake Crouch, I find his ideas and execution interesting. Hopefully his other books have a decent ending.